Your session will expire in 0 minutes.

District Celebrates Those Who Serve 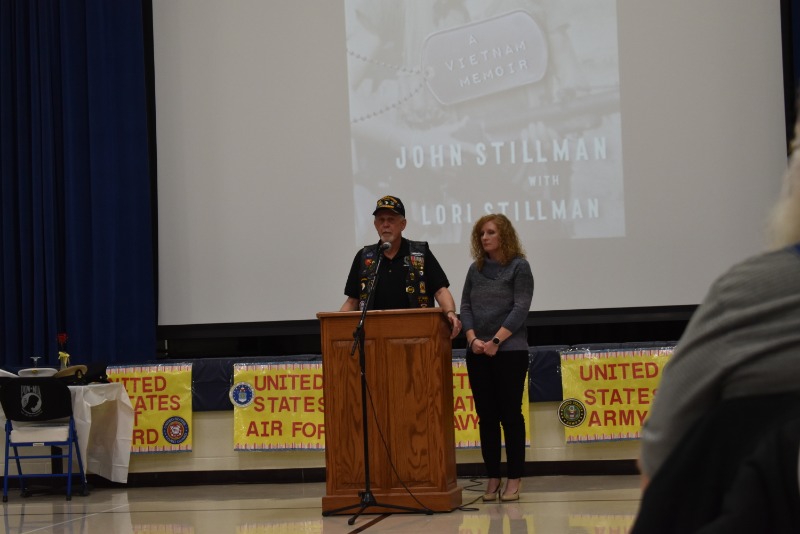 The Lonedell School District honored local Veterans on a bit of a delayed schedule this year.  Our original program, scheduled for November 11, was canceled due to hazardous weather.  The rescheduled ceremony was held on Thursday, November 14 at 8:30.  The band began the ceremony with the Veterans Processional, as the honorees entered the gym filled with staff, students, and community members.  Welcomed by Dr. Dierker, the Veterans were thanked for their service and example to our young students, "It is so important that our young people see your example of being real life super heroes."  The Treble Makers, led by Mrs. Miller and Mrs. Friel, sang the medley, "Armed Forces - The Pride of America" beautifully.  During this song, each veteran stood during their branches's service song.

The ST. Clair Jr. ROTC members presented the POW/MIA Remembrance Ceremony, which features a table set in honor of those who have not come home from service. "This table is our way of symbolizing the fact that members of our  profession of arms are missing from our midst. They are commonly called POWs or MIAs, we  call them "Brothers." They are unable to be with us today and so we remember them."  Following this ceremony, the Jr. ROTC demonstrated the folding of the American Flag, which describes the significance of each fold.  "The third fold is made in honor and tribute of the veteran departing our ranks, and who gave a portion of his or her life for the defense of our country to attain peace."

Two students were selected to read their Veterans Day Essay, titled "What Makes America Great".  First was Tessa A. followed by Charlie D.  These girls mentioned education, diversity, and our beacon to the world about freedom of choice and from oppression.  Mrs. Ulrich introduced our featured speakers, Lori Stillman and John Stillman.  Mr. Stillman served in the 101st Airborne Division during Vietnam.  He didn't speak of his service for decades.  Finally, persuaded by his daughter, Lori, they together wrote a book called Jumping from Helicopters.  This book describes the events he endured throughout his service.  Mr. Stillman spoke to the students about how he jumped out of the first plane he ever flew in.  The first time he was in a plane that actually landed was when he was shipped to Vietnam. "I thought the plan had crashed when it touched down.  I'd never felt that before!"  Ms. Stillman asked each student to look at their shoes and imagine never taking them off until after Christmas.  This, she said, is what her father and other soldiers endured while in the jungle.  The book can be purchased from Amazon at this link.

Mrs. Miller created a video featuring those who have or are currently served. All were local individuals or family members of staff and students.  Mrs. Vollmer spoke of the Power of 11 Cents, a program Lonedell school has continued well after it has ended nationally.  Each student is asked to donate 11 cents in an example of how far even the tiniest amount can make a big difference.  $78.85 was donated to our local VFW.  Finally, Dr. Dierker made a special announcement that Mrs. Miller had been nominated as the VFW Teacher of the Year.  The VFW Teacher of the Year award contest recognizes three exceptional teachers for their outstanding commitment to teaching Americanism and patriotism to their students.

Thank you to all who made this event possible.